from the Greek eteros – different and ponn – sound

A type of polyphony that occurs during the joint (vocal, instrumental or mixed) performance of a melody, when in one or several. voices deviate from the main tune.

The term “G.” was already used by the ancient Greeks (Plato, Laws, VII, 12), but the meaning given to it at that time has not been precisely established. Subsequently, the term “G.” fell into disuse and was revived only in 1901. scientist K. Stumpf, who used it in the meaning indicated above.

Deviations from the main melody in G. are determined by nature. perform differences. human capabilities. voices and instruments, as well as the imagination of performers. This is common to many bunks. music cultural roots of polyphony. In developed folk songs and instr. cultures based on nat. differences, peculiar forms of existence of bunks. music creativity and features of the performers developed aesthetic. norms, local traditions, various manifestations of the basic principle arose – the simultaneous combination of decomp. variants of the same tune. In such cultures are noticeable and diff. directions of development of heterophonic polyphony. In some, ornamental predominates, in others – harmonic, in others – polyphonic. melody variation. The development of Rus. folk-song polyphony, which led to the formation of an original warehouse – sub-vocal polyphony.

Although there are no reliable written monuments illustrating the history of the development of G., traces of the heterophonic origin of Nar. polyphony, to a greater or lesser degree, has been preserved everywhere. This is confirmed by both samples of ancient polyphony and ancient bunks. songs of the countries of the West. Europe:

Sample organum from the treatise “Musica enchiriadis” attributed to Huqbald. (“Guide to Music”). 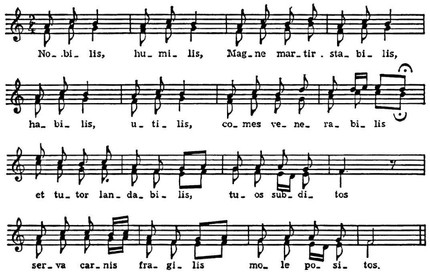 Dance song of the 13th century. From the collection of X. I. Moser “Tцnende Altertmer”.

In a number of samples, Nar. polyphony Western-European. countries where, in general, G.’s traces are compared with the Slavs. and east. less cultures, a combination of improvisation with the means of expression selected by practice, in particular with the one determined by the department. nationalities vertically, with an established attitude towards dissonance and consonance. For many cultures are characterized by unison (octave) endings, parallel movement of voices (thirds, fourths and fifths), the predominance of synchronism in the pronunciation of words. 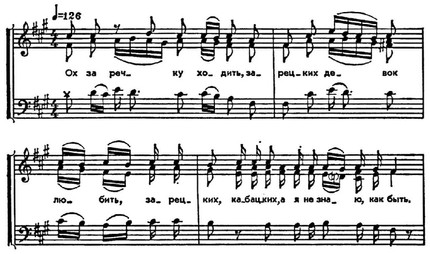 Russian folk song “Ivan got down”. From the collection “Russian Folk Songs of Pomorie”. Compiled by S. N. Kondratiev. 1966.

The heterophonic principle is also noticeable in such polyphonic folk-song cultures, where two- and three-voices have reached great polyphony. In the process of execution, division of individual parties is often observed, periodically creating an increase in the number of votes.

Ornamental “coloring” osn. melodies in instr. accompaniment is characteristic of G. of the Arab peoples in the North. Africa. Deviations from the main melody (in combination with separate sprouts of polyphony) arising from the performance of the melody pl. instruments, each of which varies the melody in accordance with its most characteristic manner of performance and fixed aesthetic principles, form the basis of gamelan music in Indonesia (see note example). 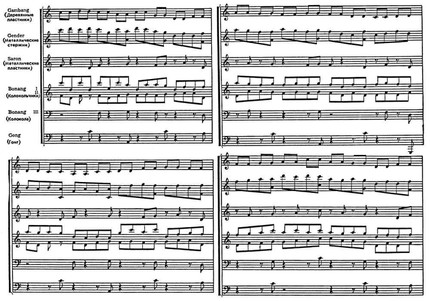 An excerpt from music for gamelan. From R. Batka’s book “Geschichte der Musik”.

Research diff. nar. music cultures and careful study and creative use by composers of samples of nar. arts, including the traditions of polyphony, led to a conscious enrichment of their music with heterophonic types of voice relationships. Samples of such polyphony are found in Western European. and Russian classics, modern Soviet and foreign composers.