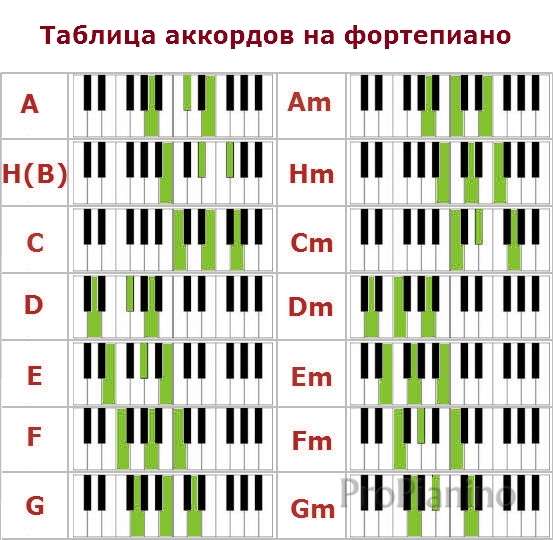 Hello dear friends! Well, the time has come to feel like little composers and master the construction of chords. I hope that you have already mastered the musical musical alphabet.

Usually, the next step in learning to play the piano is cramming, which leads to the fact that newly-minted pianists, appearing in the company of friends, of course, can play rather difficult pieces, but … if they have notes. Think about how many of you, when going to visit, think about such things as notes? I think no one, or very few :-). It all ends with the fact that you cannot prove yourself and boast of your talents and achievements.

The method of “monkeying” – yes, yes, I use this word deliberately, because it captures the essence of the most thoughtless cramming – is effective only at first, especially when memorizing simple pieces and for those students who have a lot of patience. When it comes to more complex works, you have to repeat the same thing for hours. This is quite suitable for those who want to become a concert pianist, because they need to learn exactly every note of the great masters.

But for those who just want to play their favorite tunes for fun, it’s too hard and absolutely unnecessary. You don’t have to play the songs of your favorite band exactly as they are written, as if you were playing a Chopin piece. In fact, almost all authors of popular music do not even write piano arrangements themselves. Usually they write down the melody and indicate the desired chords. I’ll show you how it’s done right now.

If a simple song like the theme from The Godfather is published with piano accompaniment, as great hits of the past and present are released, it could look like this:

There can be an infinite number of ways to arrange a theme, one is no worse than the other, among them you can choose any one to your taste. There is also this one:

The usual piano arrangement of even a simple theme, similar to the one above, looks rather confusing. Fortunately, it is not at all necessary to decipher all those musical hieroglyphs that you see on a sheet of music.

The first line is called the vocal part because it is used by singers who only need to know the melody and the words. You will play this melody with your right hand. And for the left hand, above the vocal part, they write the letter designation of the accompaniment chords. This lesson will be devoted to them.

A chord is a combination of three or more tones that sound at the same time; moreover, the distances (or intervals) between the individual tones of the chord are subject to a certain pattern.

If two tones sound at the same time, they are not considered a chord – it’s just an interval.

On the other hand, if you press several piano keys with your palm or fist at once, then their sound cannot be called a chord either, because the intervals between individual keys are not subject to any meaningful musical pattern. (Although in some works of modern musical art such a combination of notes, which is called cluster, is treated as a chord.)

A triad is built from the bottom note, which is called main tone, series connection of two third. Recall that the interval third it is large and small and amounts to 1,5 and 2 tones, respectively. Depending on what thirds the chord consists of and its view.

First, let me remind you how notes are denoted by letters:

Major triad consists of a large, then a small third (b3 + m3), is indicated in alphabetical writing by a capital Latin letter (C, D, E, F, etc.):

If you are not completely confused yet, I will tell you one more important information regarding chords.

They are divided into main и minor. For the first time, we will need the basic chords with which the accompaniment of most popular songs is written.

The main chords are those that are built on the main or – in other words – the main steps of the tonality. These steps are considered 1, 4, and 5 steps.

Respectively minor chords are built on all other levels.

Knowing the key of a song or piece, you do not have to recalculate the number of tones in a triad each time, it will be enough to know what signs are on the key, and you can safely play chords without thinking about their structure.

For those who are engaged in solfeggio at a music school, it will certainly be useful

Examples of building chords on the piano

Confused? Nothing. Just look at the examples and everything will fall into place.

As you can see, the C chord consists of three notes C (do), E (mi) and G (sol), which are easy to press simultaneously with the fingers of the left hand. Usually they use the little finger, middle and thumb:

Try playing a C chord with your left hand, starting with any C (C) note on the keyboard. If you start with the lowest C, the sound will not be very clear.

When accompanying melodies, it is best to play the C chord, starting from the first note to (C) down to the first octave, and here’s why: firstly, in this piano register, the chord sounds especially good and full-sounding, and secondly, it does not include those keys , which you may need to play the melody with your right hand.

In any case, play the C chord at different pitches to get used to its appearance and learn how to quickly find it on the keyboard. You will get it quickly.

The F (F major) and G (G major) chords are similar in appearance to the C (C major) chord, only they naturally begin with the notes F (F) and G (G).

Quickly building F and G chords will be no more difficult for you than a C chord. When you play these chords at different pitches, you will well understand that the piano keyboard is just a whole series of repetitions of the same piece.

It’s like having eight identical typewriters lined up in front of you, only with a different colored ribbon in each of them. You can type the same word on different machines, but it will look different. A variety of colors can also be extracted from the piano, depending on which register you play in. I tell all this so that you understand: having learned to “print” music on one small segment, you can then use the entire sound volume of the instrument as you wish.

Play the chords C (C major), F (F major) and G (G major) as many times as you need to find them in no more than two or three seconds. First, look for the right place on the keyboard with your eyes, then place your fingers on the keys without pressing them. When you find that your hand is in position almost instantly, start actually pressing the keys. This exercise is important to emphasize the importance of the purely visual aspect in piano playing. Once you can visualize what you need to play, there will be no problems with the physical side of the game.

Now let’s take the tone G major. You know that with the key there is one sign in it – F sharp (f#), so the chord that hits this note, we play with a sharp, namely the chord D-F#-A (D)

Let’s now practice a little with some examples. Here are some examples of songs written in different keys. Don’t forget the key signs. Do not rush, you will have time for everything, first play each hand separately, and then combine them together.

Play the melody slowly, pressing the chord each time along with the note it is listed above.

Once you’ve played the song a few times and you’re comfortable enough to change chords in your left hand, you can try playing the same chord a few times, even where it’s not labeled. Later we will get acquainted with a variety of ways to play the same chords. For now, limit yourself to playing them either as little as possible, or as often as possible.

I hope everything works out for you