Gather your courage – it’s time to start learning! Before you sit in front of the instrument, leave all the negativity somewhere to the side and concentrate as much as possible. It would seem that things that are simple at first glance will still have time to present you with many surprises, but most importantly, do not lose heart if something does not work out for you the first time. The second important advice is don’t rush, Moscow wasn’t built right away either. (But if suddenly you are already studying at a music school and ended up on this page by accident, it will certainly be useful for you to read about the fifth circle of keys – a topic that is usually difficult for students to master in practice).

In principle, it is not so important what type of keyboard instruments you will be learning on, but I would strongly recommend that you still opt for the piano: synthesizers, although more compact, have a significant drawback – most of them have reduced-type keys , they are not full-bodied and you will not feel “bounce” and, on top of that, they are often limited to three or four octaves.

And yet, I immediately rebuke you – for now, limit yourself to only this lesson of our Tutorial, do not forget that this is just a piano for beginners. Do not immediately try to embrace the immensity in a day – this will only bring harm.

It would even be better for you to repeat for several days only the material that you learn from here. And when you are ready, you will feel it yourself. Often people who can play the synthesizer quickly and fluently have trouble playing the same parts on the piano. But in the opposite direction, this rule will work accordingly: for those who played the piano, the synthesizer will seem much easier to perform.

Blitz: quickly press the key with the note A!

I bet you didn’t make it. The impression that since the piano keys are arranged in the order Do Re Mi Fa Sol La Si, then it is not worth the trouble to understand them is a profound delusion. I am completely silent about the black keys!

Look carefully and remember – these are the basics of the basics that you will need to know first. Play the notes, naming them, over time you will be able to instantly determine the location of any note, in the future, when you start studying chords, you will thank me more than once for focusing your attention on such a seemingly lightness.

Do not be afraid, I have not forgotten about the black keys, but here you will need a little insight into the theory, but you need to start somewhere, right?

At this stage, you already need to know the concept interval. Intervals are the difference between two sounds of a particular pitch.

Semitone – the smallest unit in the measurement of intervals. On the piano, these are, for example, the keys Do and Do Sharp, in the absence of black keys, the adjacent sound will be a semitone, like Mi and Fa, for example. By the way, on stringed instruments, adjacent frets on one common string will be semitones.

No, # is not a tone dialing icon on the phone. Sharp (#) and Flat (b) are the so-called accidentals, denoting the rise and fall of a certain note by a semitone. So, flats and sharps will be not only notes on black keys:

As mentioned earlier, the rise and fall of the main notes is called alteration. There are five accidental signs: sharp, double-sharp, flat, double-flat and bekar. They are written like this:

The effect of accidentals on the pitch of notes is as follows:

Accidentals can be of different range – “key” and “oncoming” or “random”. The first are placed immediately by a whole group next to the key, to the right of it, each on its own ruler. Always in a certain order. Sharps in the key are written as follows:

The clef flats are written in the following order:

Key signs act on all notes in their line, which can occur throughout the work, and even regardless of the octave. For example, the key sharp “fa” will raise all the notes of “fa” without exception, in all octaves and throughout the entire length of the piece.

Counter the signs are valid only on their ruler, only in their octave and only during ONE STATE (as road signs are valid only up to the first intersection). For example, an oncoming backer can cancel the effect of even a key character, but only for the current measure and only on this ruler. Counter signs are placed to the left of the head of the note that needs to be altered. This can be seen in the following figure.

So, I hope you have a general idea of ​​accidental signs. It only remains to add that tone is the next highest value after the semitone.  Well, I think you already guessed about it.

Remember the information given above – it is not very complicated, but will be needed everywhere. And we will use it immediately! I will try to explain everything as clearly as possible.

Musical Scales: Playing the C Major Scale and Others

Harmony – pleasant for our hearing coherence of notes. Key is a set of specific notes subordinate to one main note. 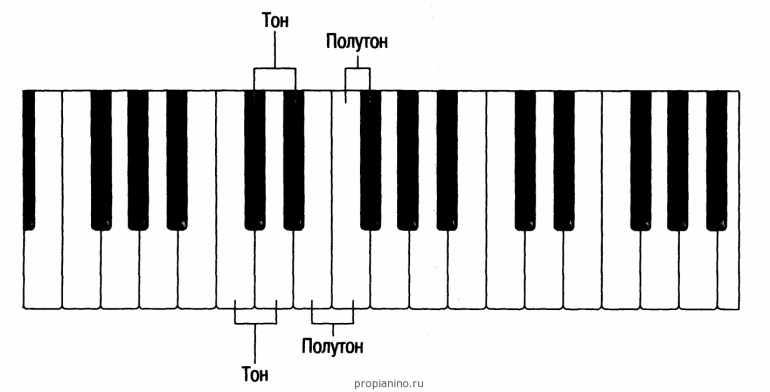 The first thing you need to know, based on the knowledge gained, is the construction of major scales.

Scales are notes that are arranged in a certain order. The difference between major and minor is often explained to children as “happy” and “sad” scales, respectively, but this is not completely true – nothing prevents making sad songs in major and vice versa. Here are their main signs:

Remember carefully, with this simple formula you can play any major gamut:

To make it easier:

The C major scale is the easiest and most obvious to play – on all the white keys in a row from C to C (yes, there are too many Cs in this sentence, but c’est la vie!).

At the first stage, you will need to know 3 scales: C major, G major and F major.

Important! It is highly desirable to play scales in 2 octaves, and it will look like this:

Attention: there are exceptions to all rules!

In this case, everything will be so, but more on that later. The F major scale will be played differently. So that you don’t get completely confused, look at the pictures below – after them you definitely shouldn’t have any questions left!

That’s the exception to the rule! If you try to play this scale according to a given scheme, you yourself will understand how inconvenient it is. Especially for her, when playing with the right hand (only with the right, everything is played with the left as usual !!!) a different sequence of fingers is used:

For the right arms:

And then, respectively, in the opposite direction:

First, hone and memorize well how these scales are played – the next lesson will be devoted to the basics of musical notation.

Do not try to play the scales very quickly right away – it is better to do it rhythmically, because the brain remembers information better if you learn to do anything at a slow speed. Subsequently, the speed will appear by itself, but first it is important to bring everything to automatism.

Playing scales, you will be able to direct your fingers just as freely, without hesitation, you will easily improvise with other musicians or compose your own melodies.

Good luck with this difficult first step in learning to play the piano for beginners!

A Tribute to "Number Two" 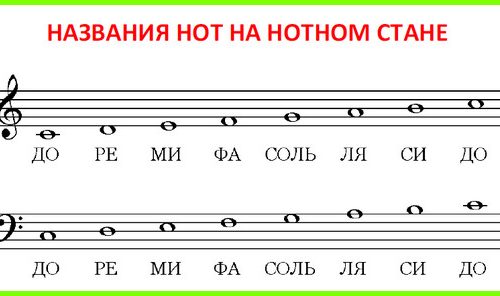 How to read music (Lesson 2)