In this lesson, we will try to understand four-sound chords. I hope you have already mastered the game of triads a little? If yes, then it’s time to move on, the negative answer sends you straight to Lesson #5 (to reinforce the material about chords).

Four-note chords are chords that consist of four notes.

In fact, four note chords are no more difficult to play than three note chords. You will soon see this for yourself.

If at first you find it difficult to play four notes accurately without accidentally hitting adjacent keys, don’t worry. You know exactly what you are striving for, and therefore you will soon hit only the right keys. In most cases, the cause of such “misses” is not a lack of fluency, but fear. Yes, yes, it is fear that binds your fingers, preventing you from playing chords correctly, it is fear that makes them stiff and clumsy.

One piece of advice – relax and enjoy the correct and pure play of beautiful pieces. Let it take someone ten minutes, and someone ten hours, but the result will exceed all your expectations

and you can easily play any chords.

The most common chords, and the most important, are septaccord. They are called so because its extreme sounds form a seventh. The seventh chord consists of four sounds arranged in thirds.

There are seven types of seventh chords, but we will get acquainted with only a few of them:

Many modern pianists play the grand major seventh chord even where the sheet music only indicates a major triad. The big seventh chord sounds modernistic, so it is not very suitable for songs like “The Little Christmas Tree is Cold in Winter” :-). However, in some modern songs it sounds excellent.

To build this chord, you need to add a major third to the major triad (b. 3). As a result, this seventh chord is a combination of thirds – b.3 + m.3 + b. 3 The sound of a chord is quite sharp due to the fact that its extreme sounds form an interval of a major seventh (extremely dissonant interval).

This chord is denoted by a large Latin letter with the addition of maj7 to it. For example: Cmaj7, Dmaj7, Fmaj7 etc.

Note that the seventh of a major seventh chord is a note a semitone below the root note of the chord. For example, the seventh of the Dmaj7 chord is C-sharp, Gmaj7 is F-sharp.

Try playing a beautiful chord progression that includes a grand major seventh chord. You can try to play such a sequence, even if it is not indicated in the notes, in any place where any major chord is sustained for a long time. Take a major triad on the keyboard first, and then add a seventh to it from above to get a large major seventh chord. And go back to the original chord.

The grand major seventh chord is not that common in popular songs. It is beautifully used by I. Dunaevsky in the famous “March” from the movie “Merry Fellows” (see the first measure of the song). Don’t try to play the entire song just yet, practice alternating F and Fmaj7 chords. 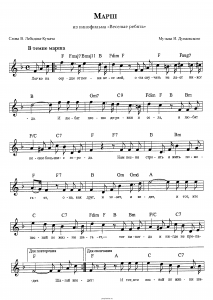 This chord is built by adding a minor third to a major triad (m. 3). It is also called dominant seventh chord. Now I will add to you a little theory about the dominant seventh chord. Don’t be scared, this explanation will give you useful information that you can appreciate later. You don’t have to memorize technical terms, the main thing is to catch the essence, which will help you pick up the accompaniment to your favorite songs by ear.

So, each note of the scale has its own name, which describes its relationship to the tonic, or to the main note of the tonality. The second note is usually called the second note, the third note is the median, the fourth note is the subdominant, the fifth is the dominant, etc., as shown in the illustration below.

Roman numerals are often used to indicate chords built on certain scale steps. That is, chords in C major can be denoted by letters – C, G, C, F – or denoted by the numbers I, V, I, IV, or called “tonic, dominant, tonic, subdominant.” Roman numerals are more convenient because they avoid the rather clumsy verbal names of the steps.

We already know from previous lessons that the main steps of the mode are I, IV and V steps, respectively, and the chords on these steps will be the main ones – tonic, subdominant and dominant. Instead of a dominant triad, a seventh chord is usually taken, it sounds more beautiful and richer in terms of harmonic sound. Let’s take a closer look at this chord. 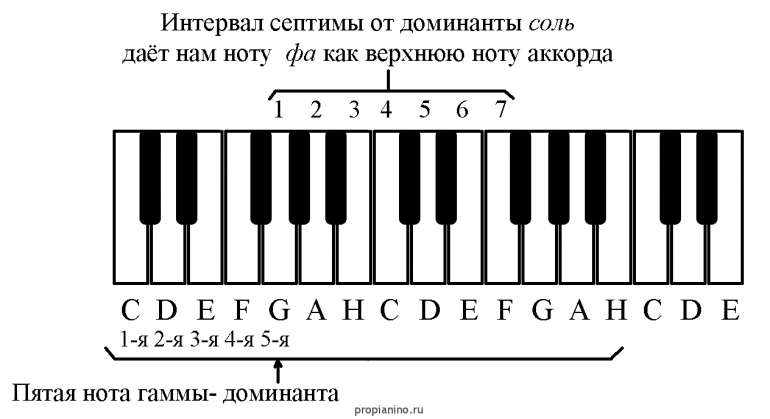 The seventh interval from the dominant G gives us F as the top note of the chord.

The easiest way to find the right notes of a dominant seventh chord is to imagine that its top note is a tone below the root note. For example, the seventh of a D7 chord would be C (C); chord C7 – B-flat (B).

To better understand these two seventh chords, play the following sequence: take a triad and double its root an octave above with your thumb, like this: 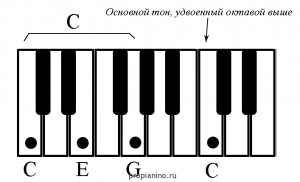 Now move your thumb down a semitone to make a big major seventh chord from to (Cmaj7), like this: 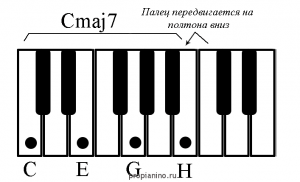 Then move your thumb down another semitone to make a dominant seventh chord, like this: 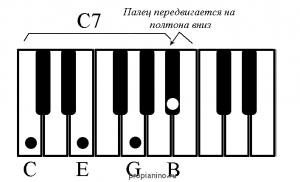 Follow the same sequence, starting with a root-doubled triad, from the seven chords below:

After playing the above sequences several times, you may have noticed that some of them are easy to remember, while others are difficult. However, there is nothing wrong with the fact that sometimes you have to stop and think for half a minute. When you start playing your chosen songs, you will find that the “complex” chords will be remembered easily and firmly, like the simplest triads. Beautiful sounding melodies of your favorite songs will greatly improve your memory.

Perhaps it’s time to stop so that you don’t accidentally have a vinaigrette in your head.

And here are some musical examples where the big and small major seventh chords are used: 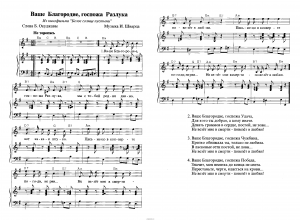 In these examples, please note that the vocal part is written on a separate staff, it does not need to be played.

How to learn notes: practical recommendations