At the last lesson of our Tutorial, we learned how to navigate the piano keyboard, got acquainted with the concepts: interval, tone, semitone, harmony, tonality, gamma.

However, if you are going to be serious about playing the piano, then you need to be able to read music. Agree that if you, for example, are fluent in a foreign language, but cannot read or write in it, then the value of your knowledge will be much less. Yes, I won’t lie to you – this is not the easiest knowledge to learn, and at first you will have to spend some time to understand which note on which line means what, you will have to master the local analogue of punctuation: pause signs, durations and the like. But, again, the result will not keep you waiting.

As a result, you will be able to freely understand musical notation and subsequently, simply putting the notes in front of you, you will read them like a book in Russian, and just as calmly you will instantly play musical works of any complexity on the instrument. And with the piano without them it will be really difficult. Guitarists have a lifesaver, the so-called tablature, which clearly shows which fret and which string you need to hold in order to reproduce this or that sound, but, to be honest, this is a rather primitive system, and professional guitarists, and indeed any musicians use notes.

Look carefully at the picture below, it shows everything as clearly as possible. The first thing you will see is the piano keyboard and the inscriptions above it. 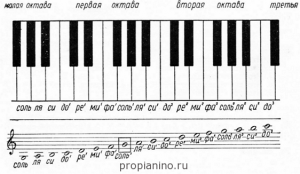 Below you see treble clef – while you will mostly work with it. Otherwise it is called Salt key – the note depicted next to it, just as it is not difficult to guess, Sol, an important nuance is the salt of the first octave. This is the most common of all types of keys, used for high notes, and is also not suitable for every instrument. On the piano, the notes recorded in this key will be played mainly with the right hand. In addition to the piano, notes are written in this vein for the violin (hence the name), for most wind instruments, for guitars, and in general for instruments that reproduce notes from a small octave and higher.

The second key used for the piano is bass,or Fa key (the note is located next to it). It is used less frequently than the violin one, and at first you will not actively use it, but later, with the complication of parts, you will have to play bass lines that will be located below the small octave (subcontroctave → counteroctave → large octave → small octave).

Bass is a low sound, so the key is used by instruments with a low pitch, such as bass guitar, double bass, bassoon.

Important: the differences in this case are not just cosmetic – on the stave, notes in the bass clef will be written and arranged differently, you will have to memorize them separately, but we will touch on the bass clef later.

One of the most important features of notes is that they represent not only what note is being played, but also what its duration is. All the notes that you see above are whole, that is, they go throughout the whole board

Tact – a segment in the work between two bar lines placed in front of the so-called strong beats in music.

This is how the bar line in the middle of the work is depicted:

And this is how the last bar line is depicted, on which the work ends:

strong beat – the climax in a single measure, it is distinguished by the fact that the note is played more loudly, the most important thing in it is that the musician emphasizes it and the listener, even unconsciously, will understand where the passage ended. After all, you caught yourself on the fact that while listening to music, you involuntarily tap the rhythm with your foot, gently slap the table with your palm, nod your head to the beat of the music. Each of your nods or kicks is a fraction of the measure (unless, of course, you suffer from arrhythmia, but I doubt it).

With regards to note durations, their image will be much easier to remember than the information that you have already received. 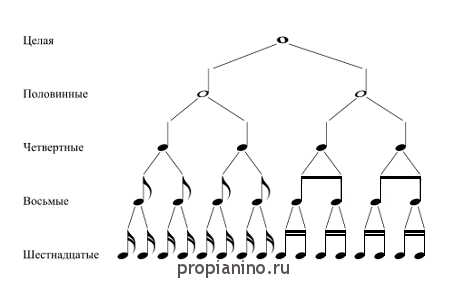 You can continue if you wish for a very long time. Now you have a superficial idea of ​​what notes with different durations look like, now try to get to the bottom of it … 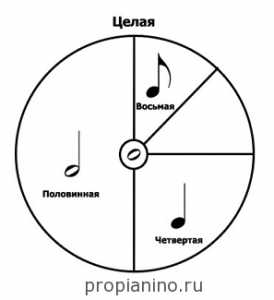 The duration names, as you can see, are the biggest clue. The whole circle drawn above is a whole note, it sounds throughout the bar. A half note, respectively, is two times smaller.

Accordingly, exactly as many notes can fit in a measure as can fit in this circle: it cannot contain, for example, two half notes and one eighth, there cannot be five fourths. The sum cannot exceed one, that is, a whole note. Everything else will be limited only by your imagination:

As I already wrote, durations will not be limited to eighths or sixteenths. 32s, 64s, even 128s and beyond (although this is more of a fantasy).

I think you get the point…

Within each measure, a certain number of rhythmic beats can be located.

Throne – it’s like train cars that can only fit a certain number of passengers, for example 4 adults or 8 children

(size 4/4). How many of them can fit in a beat indicates размер.

So, we have one finishing touch left – beat size.

Take another look at the diagram above. If there were no other factors influencing the creation of music, then we would live in a world where the downbeat would always be the same in all songs, in a world where there would be no dance music, and in general the rhythm would be very poor. 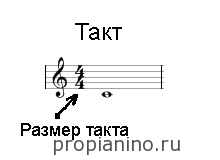 The numbers that are written after the key indicate what beat size, that is, how often and in what position you will hear a strong beat.

Upper size number means how many beats are in a measure, and lower What are they in terms of duration?

4/4 is the most common size, it is accepted as a reference. When I talked about note durations, I was talking about the 4/4x time signature. These figures mean that there are 4 beats in the measure and they are quarter-beats in duration.

But besides it, there are others, and quite non-standard. But while I will not overload you much, for the first time (and it will be long enough) these three will be enough for you:

To make it easier to understand, here, for example, how the bar in 2/4 looks like in the diagram:

As you can see, the whole measure is ½ of 4/4 and, accordingly, it is 2 times less than a whole note, i.e. the maximum size in it will be half:

Every 2nd beat will be considered as a strong beat.

In ¾, everything will be a little more complicated: 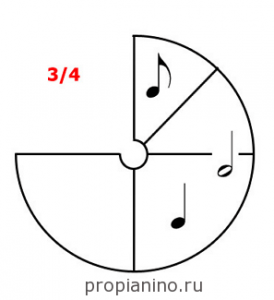 By the way, waltz is played in this measure! But this is nothing more than a question about dance music. Those who have been dancing will understand me, and in general, many, I think, have heard this phrase, which has already become stereotypical, more than once: “One, two, three! One two Three!”. Yes, yes, this is ¾.

The part doesn’t always have to fill the bar completely, sometimes there should be empty spaces, pauses, to be exact. For their designation, there are also special signs that, nowhere to go, but you have to remember. Remember also that if there is a bold dot next to the note, then this means that the duration has been extended by half! 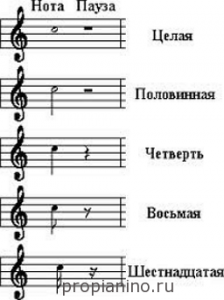 I hope you still remember the first lesson, where I explained how scales are played.

We analyzed C major (C dur), F major (F dur), G major (G dur). Now, having gained new knowledge, let’s see how these scales will look (we can do without C major – everything is already obvious there).

Flats and sharps indicate the notes that you will play on the black keys …. However, you should already know everything, you played scales, didn’t you? After all, they were playing, right? Remember, I believe in you!

Let’s summarize and see what you can learn:

This is the simplest song from kindergarten: “Loaf-loaf, choose whoever you want!”.

If your thoughts coincided with the above, then I hasten to congratulate you, you are moving in the right direction. If you didn’t succeed at once, then don’t be discouraged – this material is quite difficult to master from scratch …. But, as they say, the main way to learn something is through practice. To begin with, play simple songs from sheet music, and, importantly, try to sing the notes you read. At the same time, it is desirable that you have a person with knowledge and good hearing next to you, because if you “crap”, it will only harm you. If you are confident in your own hearing, then go ahead … In extreme cases, you can focus on your piano – it will not let you lie with your voice.

Gradually, if you sing and play even the same scales, your professional level will rise to a much higher level, and you will read notes with much more confidence. You remember that the most important thing in a building is the foundation. The more firmly you lay it down, the easier it will be for you to live in the future. In the meantime … Patience to you, my friends, patience!

Today, as a bonus, I suggest you practice identifying notes using this one. music learning program.

Our next, third lesson will be devoted to scales, intervals and other concepts that a future pianist needs to know about. 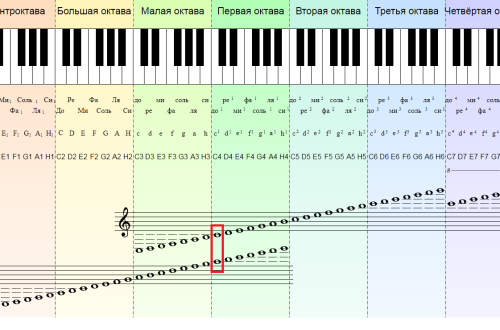 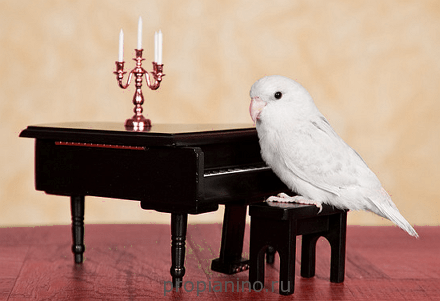 Learning to Play the Piano (Introduction)