Left hand position on the guitar

Consider placing the left hand on the neck of a guitar. The photo below shows how the hand should stand correctly. 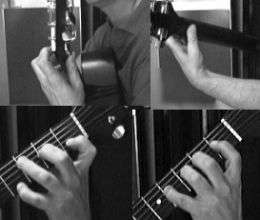 As you can see, when pressing the string, the fingers do not bend in the phalanges and press the string like “hammers”. The thumb is located on the back of the neck, providing support for the stability of the hand on the neck of the guitar.

The strings should be pressed with your fingers at the very fret nut, as shown in the following photo. In this case, the pressing force on the string is less, and the sound is clearer. This rule is used by all professional guitarists. 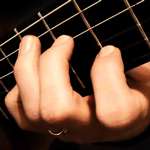 In order to avoid problems with the analysis of the etude by I. Nikola, who is the teacher of the famous guitarist and composer Leo Brouwer, here is a part of the fretboard with notes. At first, it will be a little difficult to find this or that note on the fretboard, but gradually everything will fall into place. To begin with, pay your attention that the notes of the sixth and fifth strings are written on additional rulers, and the note si (the second open string) is located just in yoursmiddle of the staff (I specifically wrote the middle through и) this mistake of mine will help you more easily remember its spelling and position on the fingerboard. It’s just as easy to remember the note C on the extension ruler – it looks like the planet Saturn and is denoted by the letter “C” in alphanumeric notation. The entire musical notation of the etude is presented on a staff consisting of five horizontal lines:

The staff is divided by barlines into eight bars:

Let’s also get acquainted with the accidental signs that are found in this study. Accidentals are key and random. This study has a sign # – sharp with a treble clef (key) and a random sign # in the fifth measure of the etude.

Sign # A sharp is a sign of raising a semitone. This means that you need to take this note on the next fret towards the body of the guitar.

Sign # – a sharp written before a note is called random and the force of this sign extends only to one measure. In our case, this is salt. # in the fifth measure. We take this note not on an open string, but on the first fret.

Sign # – the sharp at the key is on the line where the note F is written, which means that all the notes of F in this etude are played half a step higher (in our case, the 3rd and 7th measures of the note F are taken not on the first, but on the second fret).

This etude consists of several chords and is based on the enumeration of the previous lesson. Each measure is a chord, so after playing the first figuration (brute force) do not rush to remove your fingers from the fretboard, since the next figuration of this measure is the same chord only with a different bass. At the end of the etude, the notes are written one above the other, which means that they sound simultaneously. Try to play this etude slowly and as evenly as possible.

In order to quickly learn this etude by analyzing musical notation, try writing it in the form of tablature of chords. This is very easy to do: the string that is not used is indicated by X, if you press the string on the 3rd fret of the guitar neck, then put the number 3, if an open string sounds, then designate it as zero. Chords are written starting from the sixth (bass) string. Here’s an example of the first measure of the etude (3XX003) (X2X003) you just have to play it by enumeration. Now the second measure (X3X010) (XX2010) and so on. It is quite possible that the task of this lesson will seem a little difficult to you in this case, go to lesson number 11 “Theory and the guitar”, and return to this and the next lesson a little later.

The House of the Rising Sun 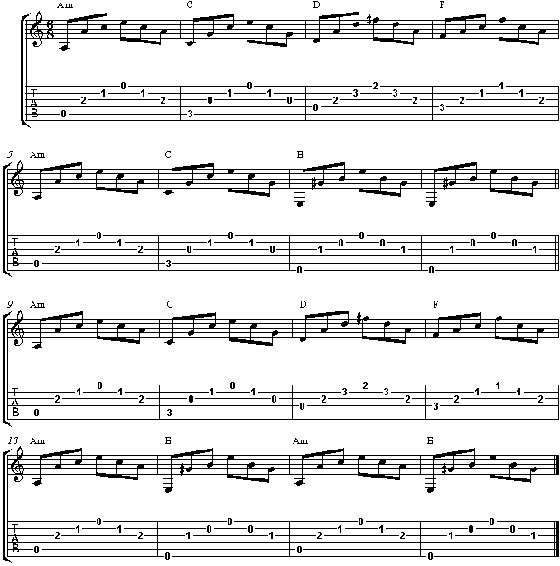