Double counterpoint is the most common variety of vertically movable counterpoint; covers opposite permutations of voices, as a result of which the upper voice becomes lower, and the lower voice becomes upper. D. to. requires compliance in the initial connection of two melodies with a number of restrictions determined by the total value of the movement of melodies, that is, its so-called. interval indicator. D. is most often used to. octaves, decims and duodecims. Restrictions on the freedom of contrapuncture in these cases are minimal. If in practice wok. polyphony (the so-called strict writing), a certain preference is given to D. to. duodecima, then in contrapuntal. the technique of free writing, dating back to the time when the tonal system reached maturity, the predominance of D. to. octave is noticeable, which preserves the tonal unity of both melodies in the derivative combination. In the 2nd floor. 19th century together with the increased interest in color, D. to. decima and duodecima are more often used, which allows for various kinds of duplication. Application diff. interval indicators D. to. due to changing in the course of the development of music. claim-va attitude to the problem of consonance and dissonance. 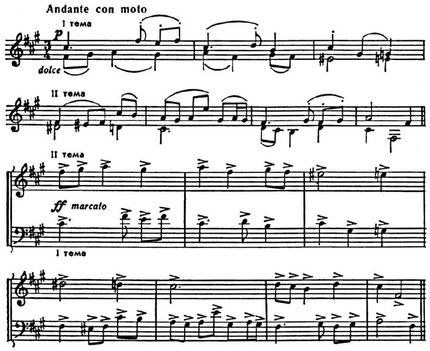