Mixer is the basic tool of every DJ’s work. It allows you to connect several different sound sources, change their parameters, such as emphasizing or suppressing specific frequencies, or simply – adjusting the volume as well as introducing sound effects.

In recording situations, it can serve as a signal distributor to recording devices. The concept of a mixer is very broad and can refer to many types of devices. In the above article, I will discuss the meaning of the word in terms of DJs.

As a beginner DJ, you should start your mixing adventure by purchasing a good mixer that will meet your expectations. I assume that you guess what the task of this device is, but you do not know its structure or possibilities, so I will tell you about it at the beginning. Each mixer has a specific number of inputs and outputs. We give a signal from a given device to the inputs, then it passes through a number of different devices and reaches the output.

A single mixer channel consists of several devices that we need. One of them is the preamplifier, colloquially speaking it is the “Gain” knob. It is used to amplify the signal to a linear level (0,775V). Simply put, not every song has the same volume. One is quieter, the other louder and with the help of Gain we set the appropriate volume level of the song.

The next device is the tone color corrector, depending on the device, two, three or four points. Usually we come across a three-point equalizer (3 knobs eq). They are used to cut or punch up parts of the bands while mixing tracks.

We have three knobs, of which the first (looking from the top) is responsible for the high tones, the second for the middle and the third for the low tones. Then we have a button that is popularly labeled cue or pfl. It is nothing else than the button responsible for turning on the monitoring on the headphones.

Each channel has its own independent monitoring, thanks to which we can listen to the track from the selected device on the headphones. Apart from the possibility of listening to a given channel, we also have a button called master cue (also master pfl). After pressing it, we have the opportunity to listen to what “comes out” from the mixer, more specifically, we hear what is going through the speakers.

Another element is a slide potentiometer, also known as a fader or fader, graduated in decibels. It is used to adjust the volume of the channel. And here is a note not to confuse it with gain. Let me remind you, gain – amplifies the signal to a linear level. When playing above this level, we will hear distorted sound in the speakers because the distorted signal will be reaching them. So using the popular term, we will hear a gurgling noise from the speakers. Therefore, we set the appropriate signal level with the gain, and with the slider (or fader) we adjust its volume.

Additionally, we should find a button corresponding to the channel sensitivity change. As I mentioned, we have different devices that emit a different signal value. Some require a slight gain (we use a gain for this), but there are also, for example, a microphone that emit a millivolt signal, and if you want to increase the gain value, you may not have a scale to reach the linear level. Therefore, we have an additional button to select the input sensitivity, so that we can seamlessly connect any device.

As a rule, the nomenclature that occurs is aux / Cd for devices with standard sensitivity and phono for devices that emit a low signal value. Above I described the structure of a single channel, however, some elements, such as the layout of the cue (pfl) button or the naming, are different and each manufacturer uses them at his own discretion.

Moving on, we have the listening section. This is the place where we plug in our headphones and we have the option of choosing an acceptable music volume while listening or mixing with an additional potentiometer.

In addition, we also find the main volume control, I think that the task of this device does not need to be explained. Depending on the class of the mixer, there are additional devices that I will describe a bit later. 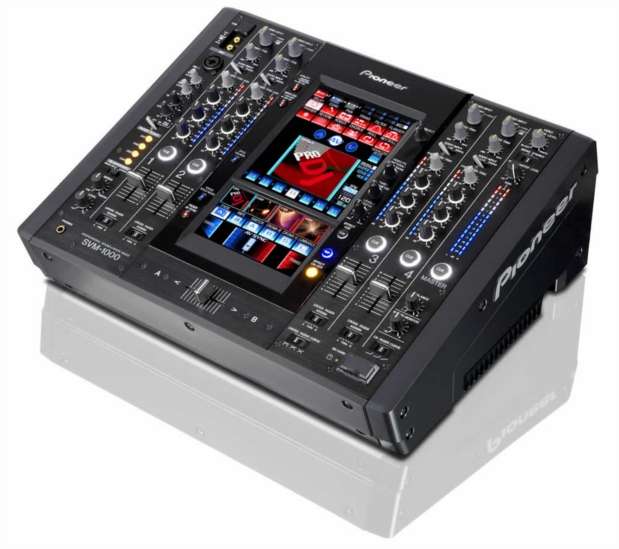 Which mixer should I choose?

To be able to mix, we need at least 2 devices, in our case depending on the preferred carriers: CD players or turntables. Why not one? Because we won’t be able to make a smooth transition from one track to another from one device.

So at the beginning of choosing our mixer, we should consider how many channels we need (the number of channels must be equivalent to the number of devices we want to connect to the mixer). If you are a beginner DJ, I recommend buying a 2-channel mixer. At the beginning, they will be enough for you. Such a mixer usually has an additional built-in channel for connecting a microphone, should we additionally want to speak to the audience.

On the market we can find a whole lot of two-channel tubes at affordable prices, offering interesting possibilities and a relatively good price in relation to quality. An interesting option in this segment is the Reloop RMX20. A relatively cheap, simple device will meet the expectations of every beginner. A slightly more expensive but also affordable model is the Pioneer DJM250 or the Allen & Heath Xone 22. These are really inexpensive, cool two-channel models.

If we want to mix from 3 or 4 devices simultaneously, we need a 3 or 4 channel mixer.

However, multi-channel mixers are more expensive. It is also worth mentioning about Behringer products. It is a relatively cheap piece of equipment that can sometimes play a prank. However, this is not the proverbial “junk” or the highest shelf, it is equipment that will allow you to mix in a very pleasant way at home. If you intend to use the equipment in the club in the future, I suggest you look for higher models.

The Pioneer brand is a leader in this field. This equipment can be found in every club and wherever something is happening. It offers many models for professional use, such as DJM 700, 850, 900,2000. The high price of the products translates into trouble-free and long operation.

Denon is another very good brand. It is as good high-class equipment as Pioneer products, but it is less well accepted on the market. It offers some really good models with many useful functions.

We buy a mixer with as many channels as we need, or we will need it someday in the future. It is also worth taking into account mixers with more than 2 channels in the event that, apart from players, we also want to connect, for example, a notebook.

In addition, we also have a few devices that I have intentionally left out as they are built-in depending on the class of the device. Such a device may be a control indicator. In lower class mixers we find one indicator divided between the signal of a specific channel and the sum of the output signal. In higher class devices, each channel and the sum of the output signal has its own individual signal indicator, which makes it much easier. Playing at home, this is not a very necessary element.

Another such device is the effector, which is usually found in high-end mixers. This device allows you to add additional sound effects to our mix. The more complex the effector, the greater the number of effects. The most common effects are: echo, flanger, filter, brake, etc. However, you have to reckon with the fact that a mixer with an effector will cost much more than a typical mixer.

When buying, we have to consider whether we really need it. If you want to diversify your mixes (DJ sets) with additional effects, it is worth adding to the mixer with a built-in effector. 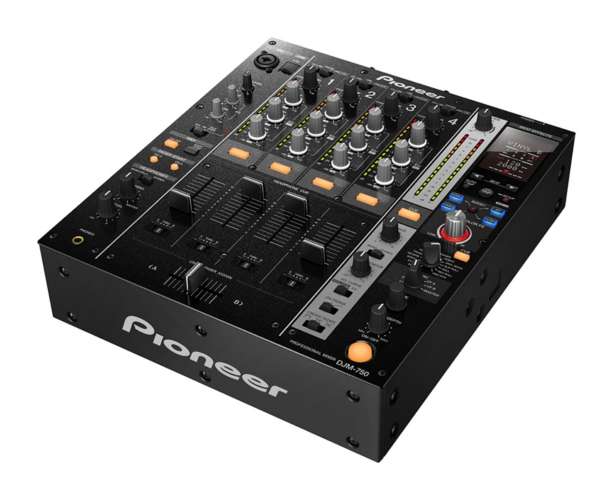 Pioneer DJM-750K – one of the most popular mixers, source: Muzyczny.pl

What else should we pay attention to?

In addition to our requirements, it is worth paying attention to the brand of equipment. When playing at home or in non-public places, we can afford to choose a cheaper model, but being a professional, we must minimize the frequency of failure, which can be guaranteed by appropriate equipment. Preferred brands in this segment are the previously mentioned: Pioneer, Denon, Allen & Heath, Ecler, Rane, but also Numark, Reloop, Vestax.

For the construction of additional elements, such as a listening section or an additional microphone channel. As previously mentioned, the poorer models may have a limited number of elements, and this will make our lives difficult in the future.

One important thing I haven’t mentioned yet is the number of exits. Depending on our needs, we have to consider how much we will need them. We may need an additional output for an amplifier with a listening column, and then what? If you plan to play with additional monitoring, pay attention to this. It is also important that the additional output has its own independent volume control.

You should also pay attention to the type of plugs. At home we meet a popular chinch plug, in clubs you can say that the standard is an XLR plug or a 6,3 ”jack. If we are going to play in clubs, it is worth having a mixer with such outputs. Otherwise, we will additionally have to combine with vias and non-standard cables.

If we have the appropriate skills, we will play on the equipment of each class, however, if we buy our first device, it is worth setting aside a certain amount of money for it.

It is not worth looking for savings because remember that this is one of the most important elements of the console. It affects not only our mix, but also the sound of the entire set. Our saving may not necessarily give us a positive effect. The more useful goodies our mixer has, the more pleasant its use will be, and our mixes (sets) will be better.

If we have such an opportunity, it is better to add to the new device, because on the secondary market there is no shortage of devices with high mileage, which will pay more in the service than give us fun. 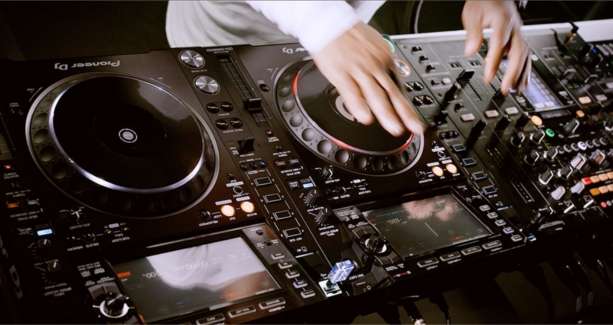 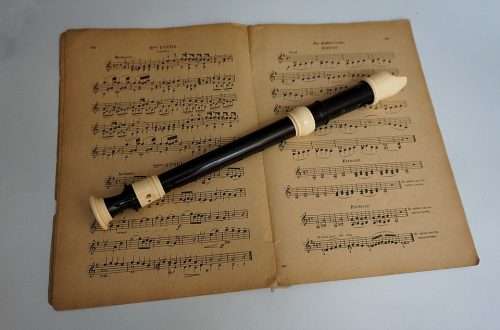 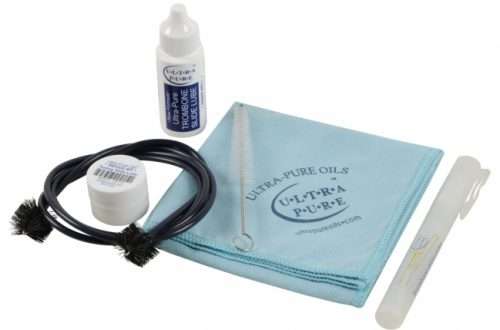 Yamaha guitars – from acoustics to electrics