How to play the play by F. Carulli “Siciliana”

Siciliana Ferdinand Carulli is a simple, beautiful and effective piece for guitar. Having learned it and brought it to a good performing level, you will have something to surprise your friends with. Starting from this lesson, we will slightly expand the study of the guitar range. If before this lesson the first three frets of the fretboard were enough, and it was already possible to perform simple pieces, now their number is increased to five. And for the first time you will play the piece in six beats. You can count up to six in this size, but they usually count like this (one-two-three-one-two-three). Siciliana begins with an out-beat and therefore a slight emphasis must be placed on the first beat of the next measure, as if on these three notes in the out-beat to increase the gradual sonority to the chord. Pay your attention to the fourth measure of Siciliana, where the circles (with blue paste) mark the strings (2nd) and (3rd). Very often, my students, when faced with familiar notes that they previously played on open strings, cannot immediately figure out how to play them on closed strings. 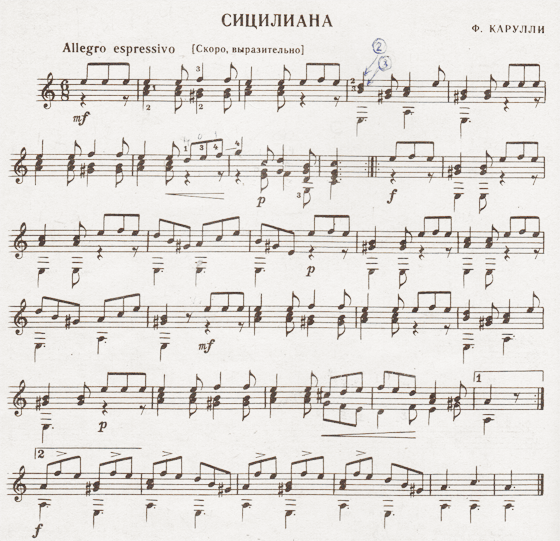 Romance of Gomez on the guitar: tabs, notes, analysis

How to properly tune a guitar for a beginner