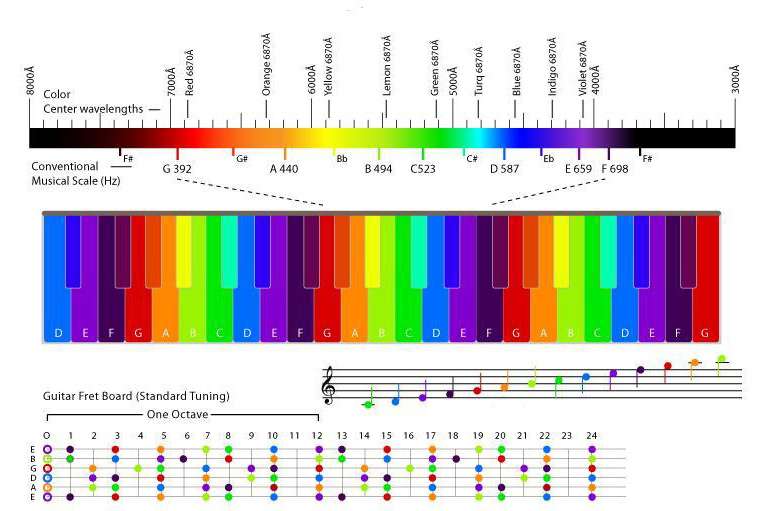 It’s amazing, but there is a close relationship between sound and color.
Sounds  are harmonic vibrations, the frequencies of which are related as integers and cause pleasant sensations in a person ( consonance ). Vibrations that are close but different in frequency cause unpleasant sensations ( dissonance ). Sound vibrations with continuous frequency spectra are perceived by a person as noise.
The harmony of all forms of manifestation of matter has long been noticed by people. Pythagoras considered the ratios of the following numbers to be magical: 1/2, 2/3, 3/4. The basic unit by which all structures of the musical language can be measured is the semitone (the smallest distance between two sounds). The simplest and most basic of them is the interval. The interval has its own color and expressiveness, depending on its size. Horizontals (melodic lines) and verticals ( chords ) of musical structures are made up of intervals. It is the intervals that are the palette from which the musical work is obtained.

Let’s try to understand with an example

– frequency , measured in hertz (Hz), its essence, in simple terms, how many times per second an oscillation occurs. For example, if you manage to hit a drum at 4 beats per second, that would mean you are hitting at 4Hz.

– each note has its own frequency

– each monochromatic (pure) color is determined by its wavelength, and accordingly has a frequency equal to the speed of light / wavelength

A note is on a certain octave. To raise a note one octave up, its frequency must be multiplied by 2. For example, if the note La of the first octave has a frequency of 220Hz, then the frequency of La of the second octave will be 220 × 2 = 440Hz.

If we go higher and higher up the notes, we will notice that at 41 octaves the frequency will fall into the visible radiation spectrum, which is in the range from 380 to 740 nanometers (405-780 THz). This is where we start to match the note to a certain color.

Now let’s overlay this diagram with a rainbow. It turns out that all the colors of the spectrum fit into this system. Blue and blue colors, for emotional perception they are identical, the difference is only in the intensity of the color.

It turned out that the entire spectrum visible to the human eye fits into one octave from Fa# to Fa. Therefore, the fact that a person distinguishes 7 primary colors in the rainbow, and 7 notes in the standard scale is not just a coincidence, but a relationship.

The value A (for example 8000A) is the unit of measure Angstrom.

This unit of measurement is often used in physics, since 10-10 m is the approximate radius of the orbit of an electron in an unexcited hydrogen atom. The colors of the visible spectrum are measured in thousands of angstroms.

The visible spectrum of light extends from about 7000 Å (red) to 4000 Å (violet). In addition, for each of the seven primary colors corresponding to the frequency m of the sound and the arrangement of the musical notes of the octave, the sound is converted into a human-visible spectrum.
Here is a breakdown of intervals from one study on the relationship between color and music:

Red  – m2 and b7 (minor second and major seventh), in nature a signal of danger, alarm. The sound of this pair of intervals is hard, sharp.

Orange – b2 and m7 (major second and minor seventh), softer, less emphasis on anxiety. The sound of these intervals is somewhat calmer than the previous one.

Yellow – m3 and b6 (minor third and major sixth), primarily associated with autumn, its sad peace and everything connected with it. In music, these intervals are the basis of the minor a, mode a, which is most often perceived as a means of expressing sadness, thoughtfulness, and grief.

Green – b3 and m6 (major third and minor sixth), the color of life in nature, like the color of foliage and grass. These intervals are the basis of the major mode a, the mode of light, optimistic, life-affirming.

Blue and blue – ch4 and ch5 (pure fourth and pure fifth), the color of the sea, sky, space. The intervals sound the same way – wide, spacious, a bit like in the “emptiness”.

Violet – uv4 and um5 (increased fourth and diminished fifth), the most curious and mysterious intervals, they sound exactly the same and differ only in spelling. Intervals through which you can leave any key and come to any other. They provide an opportunity to penetrate the world of musical space. Their sound is unusually mysterious, unstable, and requires further musical development. It exactly coincides with the violet color, the same intense and the most unstable in the entire color spectrum. This color vibrates and oscillates, very easily turns into colors, its components are red and blue.

White is an octave , a range that absolutely all musical intervals fit into. It is perceived as absolute peace. Merging all the colors of the rainbow gives white. The octave is expressed by the number 8, a multiple of 4. And 4, according to the Pythagorean system, is a symbol of the square, completeness, ending.

This is just a small part of the information that can be told about the relationship of sound and color.
There are more serious studies that were conducted both in Russia and in the West. I tried to explain and generalize this bundle for those who are not familiar with music theory.
A year ago, I was doing work related to the analysis of paintings and the construction of a color map to identify patterns. 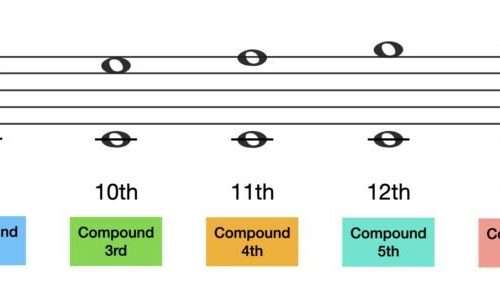