A term denoting a group of 7-step strictly diatonic. modes (see Diatonic) as opposed to modes, including modifications of the main. steps, chromatisms, alterations (for example, natural minor as opposed to harmonic). Under N. l. usually means the corresponding frets of Nar. European and outside Europe. music, frets middle-century. monody, other Russian. cult singing, diatonic frets in Western Europe. and Russian music of the new time (17-19 centuries) and in modern. music. These are the modes (full and incomplete) of the Aeolian (natural minor), Ionian (natural major), Dorian, Mixolydian, Phrygian, Lydian, diatonic variables (with the preservation of the general scale, for example, in the song “The baby walked along the forest” from the collection N . A. Rimsky-Korsakov), as well as the very rare Lokrian; to N. l. include anhemitone pentatonic of all kinds. General scheme N. l. (according to I.V. Sposobin):

N. l. have a variety of colors. For example, Dorian – with an enlightened minor color, Lydian – with a characteristic enhanced major key, etc. In the music of the 19-20 centuries. composers (E. Grieg, M. P. Mussorgsky, N. A. Rimsky-Korsakov, I. F. Stravinsky, B. Bartok, C. Debussy, and others) often use N. l. in coloristic audio purposes. So, one of the cases of using N. l. as a special express. means – in the opera “The Legend of the Invisible City of Kitezh and the Maiden Fevronia” by Rimsky-Korsakov: juxtaposition of N. l. and chromatic music saturated with alterations conveys the contrast of clear, simple, natural. speeches of Fevronia and vague, distorted, restless phrases of Grishka Kuterma. 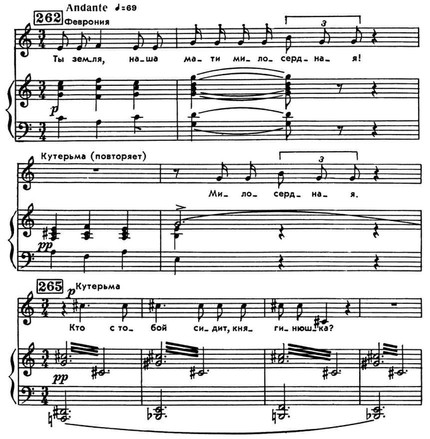 N. A. Rimsky-Korsakov. “The Tale of the Invisible City of Kitezh and the Maiden Fevronia”, Act IV.

However, the concept of N. l. in means. measure conditionally. The word “natural” (in the general sense – “natural”, “corresponding to nature”) here means “given by nature” (cf. “natural scale”, “natural horns”), not modified, not artificial (cf. opposition: “natural ” and “artificial” flageolets). In N. l. diatonicism is natural, which is understood as a modal fundamental principle. Hence the difference in Europe. minor between the “natural”, primary scale, indicated by normative key signs, and the “artificial” introductory semitone, used systematically, but not equal in rights with the tones of N. l. But such a contrast is valid only for Europe. music culture; oriental frets magnified second are essentially as “natural,” i.e., natural, like all the modes of folk music in general (in folk modes, everything is natural, everything is just the foundation, without layers on it). (See Indian music.) From this point of view, it is impossible not to attribute to N. l., for example, the everyday mode (GAHcdefgab-c1-d1), in which the sounds that form a reduced octave (H-b) are equally natural ( see, for example, the 3rd solo of the clerk from the 2nd act of Rimsky-Korsakov’s opera The Night Before Christmas), as well as “spread out chromatism” (A. D. Kastalsky’s term) in Russian. nar. music. Hence the possibility of understanding and modern. 12-step system as natural, i.e. not associated with the alteration of sounds of the 7-step system. “The study of peasant music … led me … to completely free disposal of each individual tone of our chromatic twelve-tone system,” wrote B. Bartok. However, it is wrong to call this system 12-step diatonic, because this would contradict the meaning of the word “diatonic”.