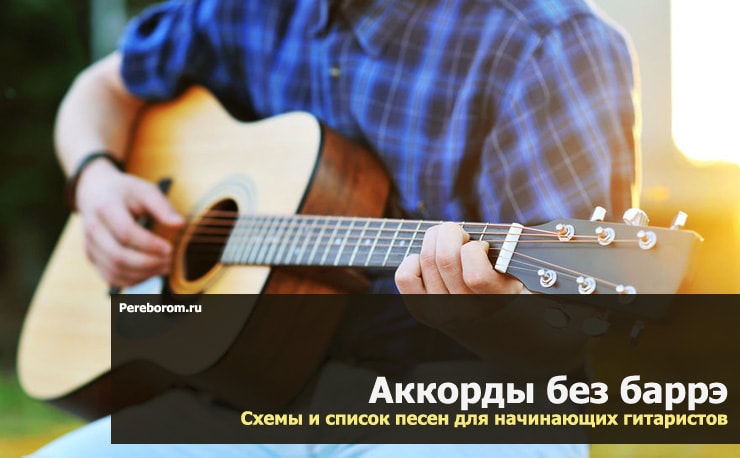 How to play guitar without barre

Barre is the main scourge and stumbling block among all beginner guitarists. Chords with this technique literally appear in nightmares, and become one of the reasons why people give up the guitar and stop learning further. However, the technique actually takes only a little time to master, after which it becomes very simple and not scary at all.

These are classic C tonic chords that don’t require a barre to play. C7 is the so-called seventh chord, which is formed by adding an additional note to the standard triad – in this case, B.

Some more schemes basic chords for beginners –this time from Re tonic. Along with the classic triads, seventh chords are also inserted, which will expand the musical sound of your compositions.

Now below are chord charts from the root of E that do not require barre playing skills. As in the previous two sections, in addition to classical triads, seventh chords are also shown here to expand your guitar melodic reserve.

These are schemes of major chords from the tonic Sol. They are given because, unlike the minor, they do not require barre skills. The seventh chord is also given along with the usual triad.

Below is that how to put chords from the tonic La. As in the previous sections, in addition to classical triads, seventh chords are also indicated.

The classic F chord requires the skill of how to play barre,however, there are still several schemes that allow you to play the same triad without holding all the strings with your index finger.

1. Hold a standard E chord, and just move it one fret to the side. This is the first position. Of course, the chord will turn out not to be a pure F, but an F with a bunch of raised steps, but the tonic remains the same, and, accordingly, the triad sounds the same. This chord form is used in, for example, the acoustic composition of Thursday – Time’s Arrow.

2. Now take the position described above, but hold it with your middle, ring and little fingers. At the same time, your index finger pinches the second string at the first fret. This is also an F chord, which is taken without a barre.

3. Repeat the same position as in point two, but this time with your index finger, instead of the second, hold the sixth on the same first fret. This is a lower variant of the chord that will work for most songs.

On the third fret, place your index finger on the fourth string. After that, with the middle, hold down the first on the fourth. On the fifth, you need to pinch the third string with your ring finger. The little finger is placed on the second on the sixth. This chord form is Fm without barre. Another thing is that jumping on the neck is not very convenient, so it would be much better to just set yourself this technique and play comfortably.

B and Bb chords

A barre B chord is most easily played in this position:

To play a Bb chord, simply shift this entire position to the sixth fret.

Another option is to play an A chord and move it to the fourth fret. At the same time, you need to do this so that your index finger remains free. After that, with your index finger, hold the first string at the second fret.

Alternative – hold down the fifth on the second. You get a deeper and deeper sound.

You can also change the B chord to a B7 chord. It is set up like this:

Often they can really be used and interchanged with each other.

1. Play the triad Am and move it to the third fret. It is important to do this with the ring finger, middle finger, and little finger – so that the index finger is free. Then place your index finger on the second fret of the first string.

Another way to put a chord with this scheme is to hold the fifth string instead of the second string, also on the second fret.

There is only one scheme for setting this chord, and it looks like this:

This position will actually require some stretching of the fingers, and may be uncomfortable for a beginner guitarist.

In order to better learn these positions, below is a list of songs that have chords that do not use barre, or that can be played in positions without it. 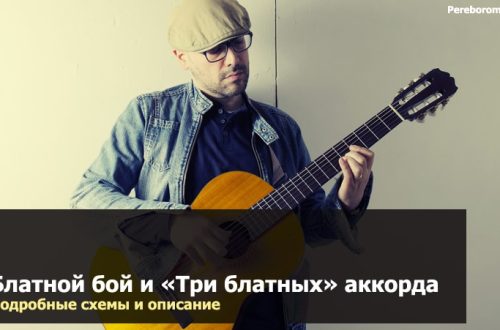 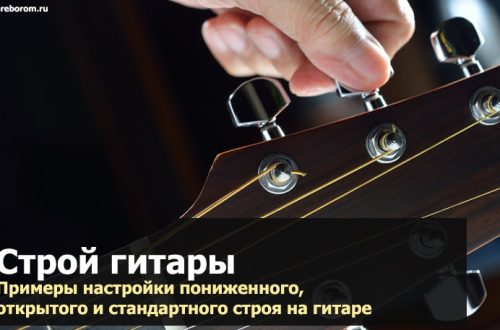 Build a guitar. Examples of low, open, and standard tuning tuning on a guitar 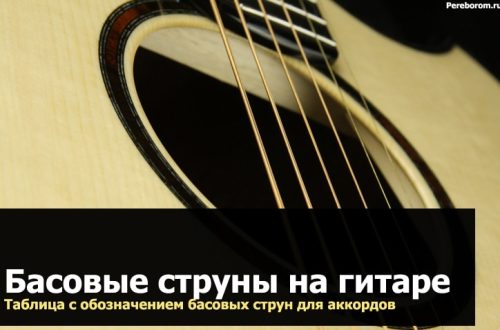 Bass strings on a guitar. Table with the designation of bass strings for chords