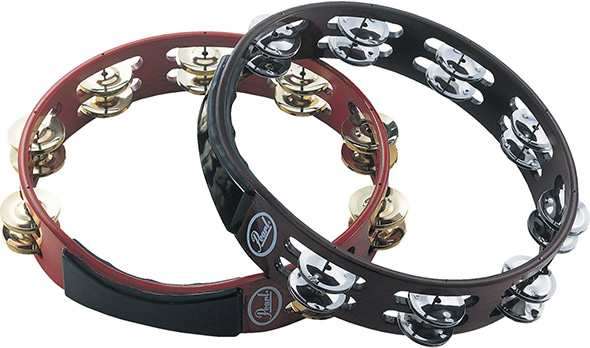 Cymbals are a percussion musical instrument with an indefinite pitch. Plates have been known since ancient times , found in Armenia (VII century BC), China, India, later in Greece and Turkey.

They are a convex-shaped disk made of special alloys by casting and subsequent forging. There is a hole in the center of the cymbal for fixing the instrument on a special stand.

Among the main techniques of the game: hitting suspended cymbals with various sticks and mallets, hitting paired cymbals against each other, playing with a bow.

In jargon, musicians sometimes call a set of cymbals “iron”

In this article, the experts of the store “Student” will tell you how to choose the drum cymbals that you need, and not overpay at the same time.

The shape of the curve of the cymbal has a huge impact on the sound. Shaping the curve of a cymbal is an essential process in shaping its basic sonic characteristic.

A flat bend has relatively less tension in the material. The basic sound of such a cymbal is warm and dark, with a quick response.

The middle bend creates tension in the material. Her basic tone is full and rich, with a medium accent and a direct response.

A sharp bend has a strong tension in the material. Its main sound is very powerful, with strong high frequencies and a clear, focused attack.

Crash cymbals are produced in a wide range of weights, from very thin to very heavy, but the edge of the cymbal must be fairly thin . In general, the profile of crash cymbals is characterized by the greatest thickness at the dome, gradually decreasing towards the edge, due to which crashes have a dense broadband sound .

The typical size (diameter) of crash cymbals is 16″ or 18″, although major manufacturers offer cymbals from 14″ to 20″, and custom-made cymbals from 8″ to 28″. Pairs of orchestral cymbals typically range in diameter from 16″ to 21″, but pairs up to 5″ are produced. 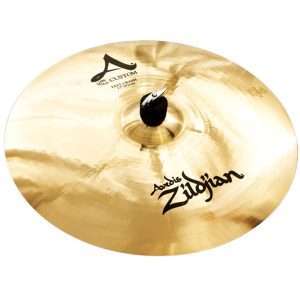 Hi-hat (English hi-hat or hihat), often referred to simply as “hat” is another type of paired cymbals that have orchestral cymbals in their origins . A hi-hat is a pair of cymbals (the profile is the same as crash) mounted on a special stand with a foot mechanism that allows you to hit one cymbal against another, and the design of this stand has changed little since its inception.

In general, a distinction is made between open ( the cymbals are apart) and closed ( the cymbals are touching because the pedal is depressed) position of the hi-hat , and the sound is produced both by hitting the stick in both of these positions, and by pressing the pedal with your foot, as a result of which the cymbals hit each other. 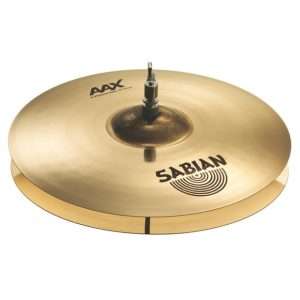 When played , a ride-type cymbal produces a long ringing, somewhat hissing sound, in contrast to the rapidly fading sound of a crash. The most commonly used rides are 20″ in diameter, but sizes from 18″ to 22″ are considered standard. Major manufacturers make rides from 16″ to 26″ in diameter , but it is possible to find rides up to 8″.

The bigger and thicker the ride, the better it sounds in louder music, and, unlike crashes, the edge of the ride’s cymbal is usually quite thick. Often the ride is the largest cymbal in the kit, but sometimes drummers use china or sizzle type cymbals as the second ride , which in this case are larger but thinner than the ride. 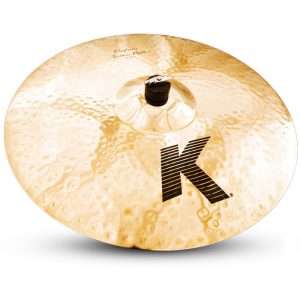 Sizzle -type cymbals are rides with some kind of rattle added to change the sound, most often rivets or chains.

This naturally makes the sound louder and more piercing, but reduces the dynamic range , because very quiet playing may not have enough energy to make the rattles vibrate.

Rivets are installed in the holes made in the plate, so that the rivets can oscillate, but do not fall out. In a classic sizzle plate, the rivets are located in several (usually four or more) holes, evenly spaced along the edge of the plate .

Countless experiments were also made on the location of the rivets in other places, but only one of them really gave something – this is the location on the plate of only three rivets in holes along the edge of the plate , but side by side. Such cymbals were very popular in the late 1980s and early 1990s, and it was even considered that they would completely replace conventional ride cymbals , but this did not happen. 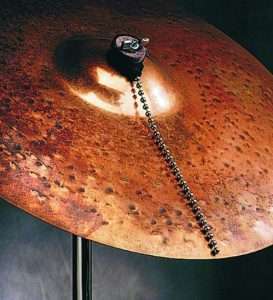 Splash cymbals are small and thin cymbals that are (along with china cymbals) one of the main types of effect cymbals.

By design, splash is a very thin and small crash, and the body of the cymbal practically does not change thickness from dome to edge, and the dome is slightly thicker, so the emitted sound is perceived as “empty” and less dense than crash, but, nevertheless, cutting through and sharp attack.

Splash cymbals are used to play accents , most often syncopated (shifted accents from a strong beat to a weak beat), and they are usually played very hard. For quieter playing, some manufacturers offer thin splashes, which have a crash-like profile, but the edge is so thin that the cymbal can break if you carelessly hit it hard . 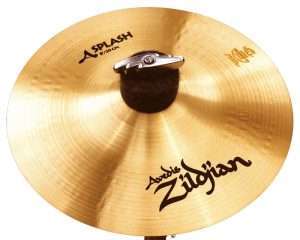 Real china-type cymbals have a cylindrical or truncated-conical (i.e., rectangular in section) dome, and the edge of the cymbal is turned up, that is, against the main direction of the body’s curvature.

The china cymbals are available from 6″ to 27″ in diameter , with 12″ and smaller cymbals often referred to as china splash or mini chinese. As part of a drum kit, they are considered effect cymbals.

Both crash and ride china cymbals are played, and the latter require a dome, so some chinas have an inverted dome so that they can be hung with the dome up, but the inverted edges are pointing down and not hit. 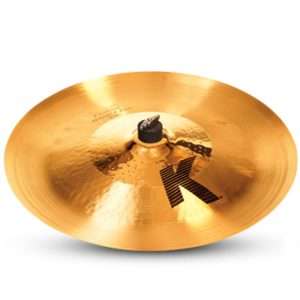 Tips from the store “Student” when choosing plates

If you hit your cymbals hard or play loudly, choose larger cymbals . They give a louder and more spacious sound. Smaller and lighter models are best suited for quiet to medium volume playing. Subtle crashes and not loud enough to star in a powerful game. Heavier cymbals have more impact resistance, resulting in a clearer, cleaner and punchier sound.

How to get great sound from cymbals?

To get great sound from cymbals, pay attention to a few simple things:

How the plates are made 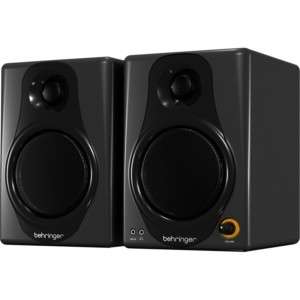 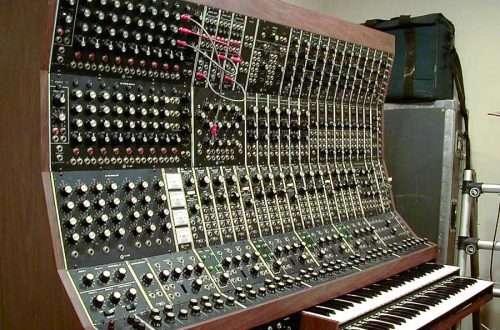